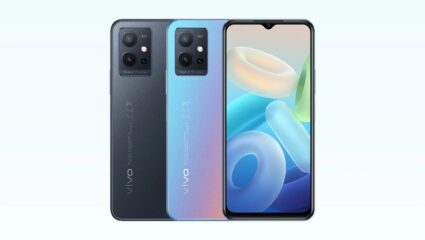 Delhi: Many smartphones were launched in the new year, the same smartphone maker Vivo has launched smartphones with 5G support in the market. The company is preparing to bring its latest model with the best features. Among these, a 5G smartphone (Vivo 5G Smartphone India) with explosive features has been secretly launched by the company, which is named Vivo Y55S 5G. Vivo Y55s 5G is similar to the smartphone launched in December 2021, the only difference is that it includes the latest features and many features including 5G support.

Introduced in other countries including Taiwan, Hong Kong, India

Vivo Y55s 5G flaunts a 6.55-inch LCD display with decent screen-to-body ratio and 60hz refresh rate. The phone has Dimensity 700 chipset processor. The fingerprint sensor is available along with the power button on its right side. The phone has been introduced with two RAM variants which are 4GB and 6GB, while both get 128GB of storage. Vivo Y55S 5G was first launched in the domestic market by smartphone brand Vivo. After this the phone has been introduced in other countries including Taiwan, Hong Kong, India. The new Vivo Y55s 5G (2023) is priced at NTD 7,990 (roughly Rs. 21,300) for the base 4GB RAM + 128GB storage model and NTD 8,490 (roughly Rs. 22,700) for the 6GB RAM + 128GB storage variant.

The smartphone has been launched in two color options which have been launched in Galaxy Blue and Star Black. The Vivo Y55S 5G packs a 5000mAh battery with 18W charging support. The phone has dual rear camera setup. It has a primary camera of 50MP and portrait lens of 2MP. Its front has an 8MP selfie camera.