In view of the heavy snowfall, several instructions have also been issued by the local administration. People have been told to be careful while driving. Also, there should be full air in the tyres.

America several cities in the last few days heavy snowfall It has been disturbed and life has also been affected a lot. A deadly blizzard hit parts of the southern US this week, disrupting air and road travel and Texas I’m so heavy power cut Had to do till About 3 lakh people in Texas are forced to live without electricity.

US airlines were forced to cancel more than 2,150 flights due to the snow storm, with airports in Dallas and Austin most affected. Dozens of vehicles crashed on slick roads due to bad weather, in which at least five people died. Snowy rain and snow are expected to accumulate in the entire region till Thursday.

According to the website Poweroutage.us, more than 270,000 people were without power in Texas alone as of Wednesday morning. Meanwhile, the National Weather Service (NWS) says a “prolonged and heavy” snowstorm continues across the Southern Plains and much of the Mid-South.

Due to this storm, it is raining in the south-central parts of America from Tennessee to Texas since Monday. Snow storm warnings have been issued for areas with a population of more than 12 million, including Dallas, Fort Worth, Little Rock and Memphis.

Instructions issued by the administration

The NWS warned of heavy snow accumulation along roads in central and north-central Texas, as well as parts of southern Arkansas. Snow accumulation up to half an inch has been predicted due to heavy snowfall. NWS says that many trees have been damaged due to snowfall and there is a possibility of power cut.

The agency said flash floods could also occur on Thursday due to heavy rains in parts of Texas as well as Louisiana and northern Georgia. Schools in both Dallas and Memphis were forced to close Wednesday due to dangerous road conditions.

Many local police departments have advised motorists to drive with caution. The Dallas Police Department asked people to make sure their tires were inflated and to slow down on icy roads. Also avoid using cruise control.

According to Power Outages US, about 40,000 people spent the night without power in Alabama. About 86,000 people in Georgia suffered due to lack of electricity. 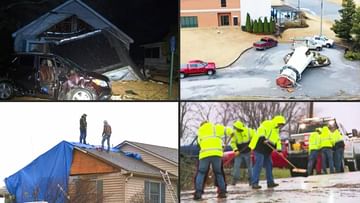 The fierce storm in the southern region of America is not taking its name. At least six people died in central Alabama and another died in Georgia due to its grip. On the other hand, on Thursday, thousands of people had to face problems due to lack of electricity. In Alabama’s Autauga County, 66 kilometers northeast of Selma, at least one person was killed, said Ernie Baggett, the county’s emergency management director. six people died It has been confirmed and an estimated 40 to 50 houses have been damaged by the storm.

Emergency Services Management Director Ernie Bagett said that at least 12 people were seriously injured, who were taken to the hospital by emergency service personnel. He told that the workers are working to remove the fallen trees on Thursday evening, so that people who need help can be searched.

Autauga County Coroner Buster Barber said late Thursday that many houses were completely damaged, which could not be found yet. The work of removing the debris is going on. According to Power Outages US, about 40,000 people spent the night without power in Alabama on Thursday. About 86,000 people in Georgia suffered due to lack of electricity.

Let us tell you that at the end of last year 2022, America also had to face a fierce snow storm. How dangerous this storm was, it can be gauged from the fact that more than 50 people lost their lives in the whole of America. Due to the storm, life had become badly disturbed. This storm has been considered one of the most dangerous storms in America in the past century.