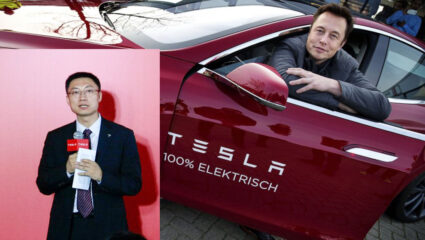 Delhi : Tesla’s China chief has reportedly been given a big promotion. According to reports, Tom Zhu has been assigned additional responsibilities at Tesla’s US assembly plants and sales operations in North America and Europe. Reports have fueled speculation that China-born Zhu is being groomed to replace Elon Musk as CEO at the world’s biggest electric car maker.

Tom Zhu, now the most high-profile Tesla executive after Musk, has played a big role in helping the company recover strongly from the Covid lockdown in China, the carmaker’s biggest international market. His reported appointment comes at a time when Elon Musk is reeling from his acquisition of Twitter, and Tesla’s stock has plunged 65% in 2022. Zhu joined Tesla in 2014 and Zhu has made few public appearances since joining Tesla and there is little public information about his age or personal life. Prior to joining Tesla, he founded a project management consulting firm that advised Chinese contractors who wanted to expand overseas.

Also do car pool with co-workers

He lives in low-cost public rental housing, paying monthly rent of less than 2,000 yuan ($290), because it is close to the giant Shanghai factory. Living close to work is convenient, he also carpools with co-workers and starts work at 6 or 7 in the morning.

Zhu’s reported promotion comes after an impressive performance by Tesla’s China operations. Tesla has expanded rapidly in the world’s largest car market since 2014. In 2021, Tesla is expected to deliver 936,000 vehicles globally, more than half of which came from the Shanghai factory. In August 2022, Musk said the company had manufactured more than three million cars, of which one million came from Shanghai. In November, the Shanghai factory set a new monthly delivery record of over 100,000 vehicles. All this was achieved after the Covid restrictions forced the plant to temporarily stop production last year. Tesla’s China sales also beat expectations. For the first three quarters of 2022, Tesla generated $13.6 billion in revenue from China, up 51% from the previous year.