China claims it was a balloon used for meteorological research, but refused to say which government department or company it belonged to.

US airspace China’s alleged flying in spy balloon After the US airstrike, the level of tension between the two countries has increased considerably. The major impact of rising tension was visible when the US tried to negotiate with China in this matter. according to reports US Department of Defense A spokesman for China says China reprimanded the Pentagon after it tried to arrange a phone call between US Defense Secretary Lloyd Austin and his Chinese counterpart after an alleged Chinese spy balloon was shot down.

“Unfortunately the PRC (China) has declined our request,” Pentagon spokesman Brigadier General Pat Ryder said in a statement. China is formally known as the People’s Republic of China. Pat Ryder said, “We believe in the importance of continuing open lines of communication between the United States and China to preserve the relationship.” He added, “Especially, in matters like this the lines between our armies are particularly important.”

Information was not given to China before blowing

America says that the balloon was a surveillance device and its circling in the country is a violation of American territory. Officials have said they did not feel obliged to tell China about the balloon before it was shot down by US warplanes off the coast of South Carolina. However, it was said from the Chinese side that the balloon was a weather monitoring device that lost its way during its journey and the US had no right to destroy it.

The alleged balloon controversy has caused great damage to the relations between the US and China. President Joe Biden met President Xi Jinping in November last year with a promise to try to rekindle ties with China, and to restart military-to-military ties that had soured last year. Was suspended after the then House Speaker Nancy Pelosi visited Taiwan. There was no immediate response from the Chinese Embassy in Washington.

Will firmly protect its interests – China

On the other hand, on this issue, China said yesterday that it will resolutely defend its legitimate rights and interests in the matter of the destruction of the suspected Chinese spy balloon by the US. US Secretary of State Antony Blinken canceled a visit to Beijing this week following the balloon episode, which was seen as a sign of hope for improved relations between the two countries.

China claims it was a balloon used for meteorological research, but refused to say which government department or company it belonged to. Foreign Ministry spokeswoman Mao Ning reiterated on Tuesday that the unmanned airship (balloon) posed no threat and strayed into US airspace. Mao criticized the US for over-commenting on the matter and for shooting down the balloon in the Atlantic Ocean off the coast on Saturday.

When asked whether China wanted the debris back, he only said that the balloon belonged to China. The balloon was not from America. The Chinese government will continue to defend its legitimate rights and interests.

Initially, China gave a restrained response to the balloon reaching US airspace and said that it strayed and reached there and expressed regret over its arrival in American territory. Later, China made strong remarks about America. There is already tension between the two countries due to China’s claim on Taiwan, trade, technology restrictions, and the South China Sea.

From Japan to Costa Rica, such balloons were also seen in other countries, which are suspected or confirmed to be from China. Media reports in Taiwan say mysterious white balloons have been seen in the area at least three times in the past two years. Taiwan’s Ministry of National Defense never told the association of these balloons with China. However, after the presence of Chinese balloons in America, a debate has started regarding the balloons seen earlier in these areas.

In a new book, Michelle Obama talks about how to stay optimistic and balanced in an increasingly volatile and turbulent world. Published by Penguin Random House, this is the third book written by Michelle Obama. 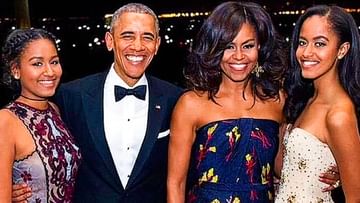 Michelle Obama, wife of former US President Barack Obama, has recently released a new book titled ‘The Light We Carry, Overcoming in Uncertain Times’. Michelle spoke openly about her relationship with husband Barack Obama (61) while promoting her new book. Michelle Obama has revealed that her husband when her children were young Barack ‘tolerated’ Couldn’t do it. However, the former US First Lady also labeled her two daughters, Sasha and Malia, as ‘terrorists’ when they were young.

Actually Michelle Obama was referring to that period when both she and her husband Barack Obama were struggling with their careers. At that time, both his children were also small, in such a situation there was definitely some difficulty in adjusting. He said that Barack Obama was going to become the President at that time.

Michel said the book aims to give us hope while working for a living in times of despair and tribulation. In a new book, Michelle Obama talks about how to stay optimistic and balanced in an increasingly volatile and turbulent world. Published by Penguin Random House, this is the third book written by Michelle Obama.

trying to make a career

Michelle Obama said that ‘people think that I say this a little too bitterly that it seems like there were 10 years where I could not tolerate my husband. And this happened when our children were young. On one hand when we were trying to make our career and on the other hand we were worrying about the children’s school.

He said that ‘It has been 30 years of our marriage. Malia, 24, and Sasha, 21, were seven and 10 when their family moved into the White House. Michelle also described her two daughters as ‘terrorists’ when they were young. He said that their demands were similar to those of terrorists. He said that ‘small children, they are terrorists, who do not talk about their demands, they cry all the time.