America has made a big deal with the Philippines to keep China under control. Here the US Army has got four more such airbases, which can play a big role in cornering China.

China to crack down on America And Philippines Has taken big steps. The Filipino government has given four such air bases to America, which will make it easier to counter China. For this, American Defense Secretary Lloyd Austin had reached Manila, where officially four military bases were handed over to America. Work on these military bases was going on since 2014, when the US-Philippines decided to set up five military bases.

Under the EDCA i.e. Enhanced Defense Cooperation Agreement, the US had planned to set up military bases in different parts of the Philippines. EDCA is of great importance to the Philippines, which includes training of soldiers, exercises and establishing better communication between the two armies. However, not much has been disclosed on the location of this military base. It is also not clear on which military base the US Army will be stationed in these.

America has these five air bases to counter China

Under the EDCA, the first five military bases were built, including César Basa Air Base, Fort Magsaysay Military Reservation, Lumumba Air Base, Antonio Bautista Air Base, Mactan Benito Abuaven Air Base. Recently, some officials of the US Defense Department had said that the US is working on a military base in the Philippines keeping China in mind. America is making big deals with many countries in Indo-Pacific especially to target China.

Easy for America to provide security to Taiwan

America has recently shared many modern technologies with India, and now the US Department of Defense plans to deploy US Marine Unit on Japanese Island. The new military base in the Philippines is very important for America. For example, especially in the South China Sea, it will help to counter Chinese aggression. With this, it will be easy for America to save Taiwan as well, which is claimed by expansionist China.

Apart from these, China also tries to establish its rights on the disputed areas of the South China Sea. At the same time, America considers it a violation of international laws and has been advising China to desist from such provocative statements. In 2016, the Permanent Court of Arbitration rejected China’s claim on the South China Sea in one of its decisions in 2016.

The joint statement of the US and Japan said that we will continue to support ASEAN centrality and unity as well as the ASEAN perspective on the Indo-Pacific. 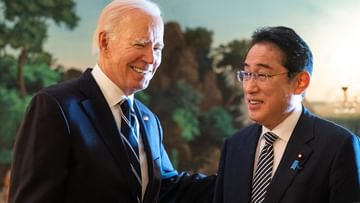 Japan’s Prime Minister Fumio Kishida reached the US on Friday. Meanwhile, PM Fumio in the US President Joe Biden met Of. During this, they held bilateral discussions with each other on many issues. After this discussion, a joint statement has been issued. It said that together with Australia and India, we will ensure that the Quad is committed to benefiting the region by delivering results on global health, cyber security, climate, emerging technologies and maritime domain awareness.

US President Joe Biden tweeted that the message from the United States is clear that on everything from national security to economic issues, our investment in the US-Japan alliance is paying huge dividends and will continue to do so for years to come.

“Japanese PM Fumio Kishida has been a steadfast ally and friend to the US. It was my pleasure to sit down with him & discuss how we’re stepping up together to advance peace, security & prosperity for both our countries, the Indo-Pacific & the world,” tweets US President Joe Biden. pic.twitter.com/HRo6jMcQyJ

My pleasure to discuss with Japanese PM: Biden

The US President said that Japanese PM Fumio Kishida has been a steadfast ally and friend of America. It was my pleasure to sit with him and discuss how we are taking steps together to advance peace, security and prosperity for both our countries, the Indo-Pacific.

Support for the ASEAN Perspective on the Indo-Pacific

At the same time, the joint statement of the US and Japan said that we will continue to support ASEAN centrality and unity as well as the ASEAN perspective on the Indo-Pacific. We are committed to strengthening important trilateral cooperation between Japan, the Republic of Korea and the United States in security and other areas.

Japan’s Prime Minister Fumio Kishida reached America in the last leg of his tour of G-7 countries. According to media reports, Kishida started his tour of six countries including France, Italy, Britain and Canada on Monday. After this he met US President Joe Biden on Friday.