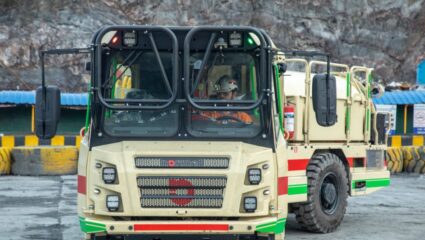 Udaipur: In a first of its kind initiative in the Indian mining sector, Hindustan Zinc, a Vedanta Group Company, has taken the unprecedented step of using Normatt Agitator Smartdrive EV in its mining operations. The company will soon be using Normat’s Explosive Charger and Battery Carts with Concrete Sprayers. Hindustan Zinc is the first mining company to join the EV revolution, continuously transitioning to electric vehicles for its mining operations. The company aims to convert 900 mining carts, all diesel-powered, to battery-powered vehicles in the next five years, with an investment of over USD 1 billion earmarked for the same.

Help to improve and decarbonize the environment

Hindustan Zinc has partnered with Finnish technology company Normet Group Oy to introduce battery-powered service equipment and utility vehicles into underground mining to help decarbonize and improve the environment in the mining industry. Each Normat SmartDrive EV is based on a modular battery electric vehicle architecture. SmartDrive EV balances high production, low cost, and most importantly the environment. The BEV has been incorporated at the company’s Sindesar Khurd mine, a world-class silver mine with state-of-the-art infrastructure and best-in-class mechanization.

Important and big step of the country for responsible mining

Speaking on the occasion, Hindustan Zinc CEO Arun Mishra said, “We aim to revolutionize underground mining, boost production, enhance underground safety standards and provide sustainable operational solutions. In our unwavering commitment to environmentally sustainable operations and net zero emissions, we have always adopted innovative and eco-friendly solutions. I believe that the introduction of battery-electric vehicles in Hindustan Zinc’s underground mining operations will revolutionize this sector and will be a significant and major step for the country towards responsible mining.

War is a fact in the world. In its annual budget, the US administration has made a provision of $ 45 billion in financial aid to Ukraine so that Ukraine can continue its war with Russia. 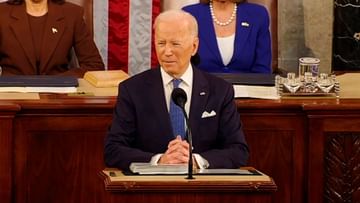 The US Senate passed a bill of $ 1.7 trillion on Thursday. (file photo)

America has Climate change But while expressing his commitment, he has let down the poor countries who are facing the brunt of climate change by keeping much less provision in the budget than what he had promised to spend internationally. American The Senate passed the $1.7 trillion bill on Thursday. But in this only 1 is needed to fight climate change in poor countries. billion dollars There is only a provision which is insufficient.

Compared to last year, the US has increased the budget for climate change by $ 900,000. If the US continues funding at this rate, it will take years to meet the committed amount. Last year, President Joe Biden extended US climate change assistance through 2024 to help developing countries address the effects of climate change and with sustainable development. promised to double the GDP to $11.4 billion per year.

However, developed nations have failed to meet their obligations, jeopardizing the fight against climate change. The target for climate finance of $100 billion has now been extended to 2025. Meanwhile, some of the countries most affected by climate change are walking on the path of destruction. For example, carbon emissions in China increased by six percent last year.

The United Nations Panel on Climate Change estimates that limiting global warming to 1.5°C requires $1.6 trillion to $3.8 trillion each year. A UN report earlier this year said that developing countries would need $2 trillion every year by 2030 to fight the effects of global warming. Another study put the figure at $340 billion every year.

Developed nations claimed to give $ 80 billion in 2019 for climate change. But experts believe that this figure has been greatly exaggerated. This amount was given in the form of grant or loan. The amount given for development has also been shown as help given for climate change.

China, currently the largest emitter of greenhouse gases, will also spend less if the US pulls out of its commitment to fight climate change. This will further increase the risk of countries facing the brunt of climate change.

According to the United Nations, Pakistan is responsible for less than one percent of global emissions but the country was devastated by floods earlier this year. This was clearly a result of climate change, which caused the death of more than 1,700 people in Pakistan and caused a loss of $ 39.9 billion.

losing trust in each other

The failure of developed countries to fulfill their commitments to less developed countries will widen the trust gap between the two sides, which will severely impact climate change negotiations in the years to come. A stable and clear funding plan for the coming years can help bridge this waning trust.

But in times of pandemics and wars, the priority of developed countries is clearly not focused on climate change. The disruption caused by the pandemic in the global economy has forced countries to spend less, which will also affect the finances needed to fight climate change in the coming times.

War is a fact in the world. In its annual budget, the US administration has made a provision of $ 45 billion in financial aid to Ukraine so that Ukraine can continue its war with Russia. This same package could have been used to help poor countries fight the ravages of climate change.