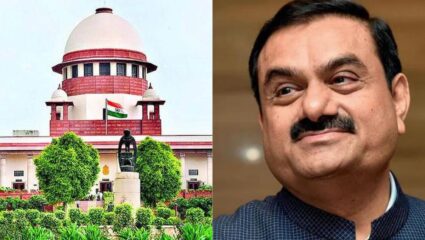 Mumbai: A storm named Hindenburg comes from America and the entire empire of Gautam Adani in India gets shaken. From the Parliament to the stock market, only Adani is being discussed. 10 days ago Gautam Adani was the fourth richest person in the world. Now it has come at number 21. In all these developments, this matter has reached the Supreme Court. A public interest litigation has been filed in the Supreme Court. In this petition, the investors have been demanded to pay the damages. The issue of the Hindenburg Report has gone to the Supreme Court. The petition calls for action against Nathan Anderson, the owner of the Hindenburg Company. This PIL has been filed by Advocate Manoharlal Sharma.

Short seller Anderson and his accomplices defrauded millions of investors. Due to this, investors have suffered huge losses. Compensation has been sought for this loss. According to the petition, a case has been sought to be registered against the short seller Anderson under sections 420 and 120 of the IPC. Anderson has also alleged conspiracy against Indian institutions in the petition. Hindenburg Research has also troubled many companies around the world. This research institute was founded by Nathan Anderson in 2017. It is a financial research firm. Analyses, researches and prepares reports on Equity, Credit and Derivatives. There is also an interesting history behind the naming of this institution. A plane crash happened near Manchester Township in New Jersey, USA.

There is currently no impact on the rating of securities

In 1937 the Hindenburg airship crashed. The firm is named after him. Nathan Anderson worked as an ambulance driver in Israel. He has a degree in International Business. He started his career with the data company FactSet Research Systems Inc. Shares of Adani Enterprises fell 35 per cent on Friday. Shares of Adani Enterprises which were at Rs 3,442 on January 24 fell to Rs 1,017 on Friday, February 3. But after a good news, the stock again climbed 50 percent to close at 1586. Good news has come for Adani Group from Fitch Ratings. Fitch rating agency says that at present there is no impact on the rating of companies or securities of Adani Group. Fitch Ratings clarified that there will be no major change in the cash flow of Adani Group. After that the trend of shares of Adani Group changed.

Zee Entertainment said that it will file its reply rejecting the claim on the basis of pre-existing dispute between the parties on the claim amount. According to the company, the claim does not conform to the interpretation of the law.