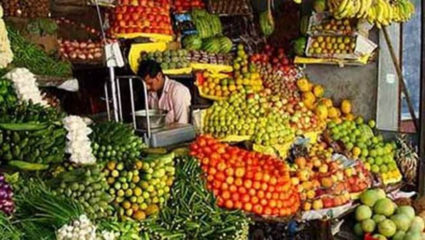 New Delhi. Retail inflation eased to a one-year low of 5.72 per cent in December 2022. According to the official data released on Thursday, this decrease was mainly due to softening in the prices of vegetables. With inflation based on the Consumer Price Index (CPI) remaining below 6 per cent for the second consecutive month, the Reserve Bank of India has got some leeway to hold off on an interest rate hike.

Retail inflation eases to 5.72% in December from 5.88% in November: Government of India pic.twitter.com/gWYdPQERBm

Retail inflation, after remaining above the Reserve Bank’s comfortable level of 6 per cent continuously since January 2022, came down to 5.88 per cent in November and 5.72 per cent in December. In the month under review, the price of vegetables decreased by more than 15 percent on an annual basis. In December 2022, fruits became costlier by two percent.

Similarly, the prices of ‘Oils & Fats’ and ‘Sugar & Confectionery’ also increased marginally. However, spices became costlier by around 20 per cent and cereals by around 14 per cent. The ‘Fuel and Light’ index rose nearly 11 per cent year-on-year in December.

With inflation remaining above the upper tolerable level of six per cent for three consecutive quarters from January 2021, the RBI had to submit a report to the central government. The next meeting of RBI’s Monetary Policy Committee (MPC), which decides on policy rates, is to be held on February 6-8. (agency)