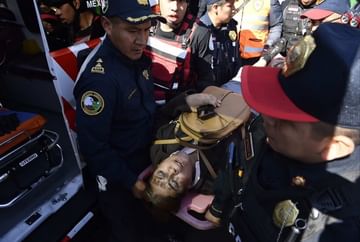 capital of south american country mexico Mexico City I had a big accident on Saturday. Two metro trains collided here. At least one person died and 57 others were injured in this accident. The local administration gave this information. Mexico City Mayor Claudia Sheinbaum tweeted that the accident happened on Line-3 of the capital’s metro system. He did not give information about the cause of the accident.

At the same time, Omar Garcia, the city’s security chief, told local media Grupo Milenio that a young woman died in the morning accident. Garcia shared an updated list of the injured with the mayor later on Saturday. The city’s mayor, Claudia, said that Garcia was present at the site during the incident. The injured were immediately admitted to a nearby hospital, where they are being treated. The rescue operation is still underway.

Latest number of injuries following train crash on the Mexico City metro line #3 is 57. Below is a provisional list of the injured and which hospitals they have been taken to. #MexicoLinea3 #MetroCDMX https://t.co/s9NWko12Yt

Let us tell you that in recent years there have been many such accidents in Mexico City’s metro trains. The most serious incident happened in May of 2021. Due to the collapse of the railway overpass on Line 12, 26 people were killed and more than 60 people were injured in the incident.

At the same time, Mexico’s President Andres Manuel Lopez Obrador expressed grief over the incident. He tweeted and said, ‘I am sorry for this accident in Mexico City Metro. Unfortunately one person has lost his life and many have been injured. My condolences to them and their families. At the same time, in another tweet, he said, ‘Relief work is going on there. The civil servants of Mexico City are participating in this, they have our full support. (with input from language)