Because of this storm, more than one million Americans and Canadians are celebrating Christmas without electricity. About 250 million i.e. 25 crore people are affected by this storm. 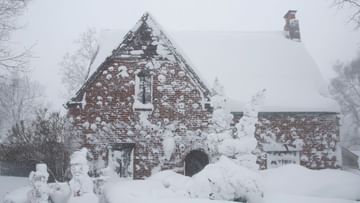 Worldwide Christmas The festival is being celebrated with great pomp. but America People are forced to celebrate this day in darkness. The reason is the snow storm which has caused havoc in many places of America. Along with America, the people of Canada have also suffered a lot due to this storm.

Because of this storm, more than one million Americans and Canadians are celebrating Christmas without electricity. About 250 million i.e. 250 million people are affected by this storm and at least 19 people have died. The storm extended more than 2,000 miles (3,200 km) from Quebec to Texas. Thousands of flights have been canceled during the festive season due to the storm.

According to the BBC report, the western US state of Montana is most affected by the cold. The temperature here is dropping to -50F (-45C). Near-white-out conditions have been reported in Minnesota, Iowa, Wisconsin and Michigan. In the city of Buffalo in New York State, the US National Weather Service (NWS) reported zero miles of visibility.

The storm caused more devastation in Buffalo, New York, and icy winds accompanied the storm. Emergency response efforts were hampered and the city’s international airport was also closed. Officials in the US attributed the death to the grip of the storm, car accident, falling trees and other effects of the storm. At least three people died in the Buffalo area.

New York Governor Cathy Hochul said Buffalo Niagara International Airport would be closed Monday morning and every fire truck in Buffalo was stuck in the snow. Hochul said, no matter how many emergency vehicles we have, they can’t get out of these situations. Snow storms, rain and freezing cold have knocked out power from Maine to Seattle, while a major power operator warned that 65 million people in the eastern US could be left in the dark.

Advice given by people to conserve electricity

Pennsylvania-based PJM Interconnection said power plants were having trouble operating in the snowy weather and asked residents in 13 states to conserve power at least until Christmas morning. Erie County Executive Mark Polonkarz said two people died in their homes in the Buffalo suburb of Cheekatowama on Friday after emergency workers could not get them treatment in time. He said another person died in Buffalo and this blizzard could be the worst in the history of our community. Meteorologists said up to 71 cm of snow accumulated in Buffalo on Saturday.