The charging technology of smartphones is constantly improving. Now companies are offering fast charging in their handsets, so that users do not have to wait long for the phone’s battery to be fully charged. We have seen smartphones with up to 210W charging and now Realme is preparing to bring 240W fast charging technology. It is believed that the company can offer this charging technology in the upcoming smartphone Realme GT Neo5. There is no information about the launch date of this phone yet, but in the meantime the live image of Realme’s 240W charger has been leaked online. In this, along with the design of this charger, some information about it is also available.

Oppo’s SuperVOOC branding on the charger
According to the photo leaked online, the model number of this charger is VCKCJACH. SuperVOOC branding has also been given on it, which supports 20A power and 12A current. In appearance, it is much bigger than common chargers. Chargers with fast charging are large in size because they have large size power components. Oppo showcased its charging technology at MWC 2022. It charges the phone 50% in 3.5 minutes and 0 to 100% in 9 minutes. 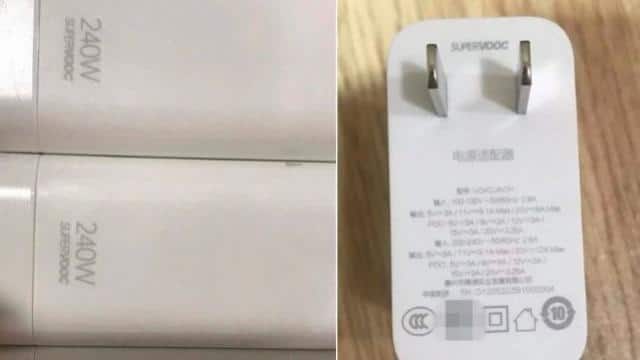 Use of five layers of security
The phone gets very hot due to the fast charging speed. This puts the phone at risk of damaging its battery. However, Realme says that it has used five layers of security to make this charger safe. As we mentioned earlier that the company is going to offer this charger with the upcoming Realme GT Neo 5. The thing to note is that this phone will also come in charging less than 150 watts. In this handset, you can get to see Snapdragon 8 Plus Gen 1 chipset.